Evolution of Logos of the Most Popular Brands - Creative Logo Designers
16360
post-template-default,single,single-post,postid-16360,single-format-standard,theme-bridge,woocommerce-no-js,ajax_fade,page_not_loaded,,columns-3,qode-child-theme-ver-1.0.0,qode-theme-ver-17.2,qode-theme-bridge,qode_header_in_grid,wpb-js-composer js-comp-ver-5.6,vc_responsive

Evolution of Logos of the Most Popular Brands

30 Jul Evolution of Logos of the Most Popular Brands

The first logo design of the global, tech-savvy Apple brand was devised in 1976 which portrays the classic scenario of Sir Isaac Newton discovering gravity while sitting under an apple tree. Apple’s logos underwent a drastic transformation in the initial years of the brand. Preceding the first logo, in 1977, the logo was transformed into a bitten apple with shades of a rainbow in the form of stripes. While it was further transformed into a translucent version in 1998, followed by a monochrome (black) version which was then converted into an aqua (silverfish) version, and we are finally living the era of a Chrome Apple Logo (A blend of silver and white) as shown below.

Initially, in 1975, the company started off with a black, bland logo exhibiting the 70s style through its design. However, this design was not able to display the integrity and authenticity of the brand itself. Despite undergoing numerous changes, they could only alter the font of ‘Microsoft’, but no graphical representation was able to come into existence. Finally, in 2012, the company logo designers were able to come up with a logo that represented the Windows system featuring four windows with different colours; each of these shades marginally displayed neon colours, and the logo was so-called ‘Flying Windows’.

The Mc Donald’s logo is instantly recognised by the entire population, and it stands for something beyond fast food for those who are genuinely committed to Mc Donald’s. With an indication of what Mc Donald’s stood for, the first logo was devised in 1940 which read ‘Mc Donald’s Famous Barbeque’ because they served barbeque and burgers back then, with no fries on their menu.

However, the second logo that came out in 1948 represented Tubby Chef Speedee which was personally designed by Richard and Maurice Mc Donald to convey their speedy service feature to their consumers. In 1962, Jim Schindler took inspiration from the eminent architectural ‘arches’ which bordered each restaurant in America back then, and he came up with the ‘Golden Arches logo’. When the Mc Donald’s brothers first called for the construction of their official franchise, the logo of golden arches turned out to look like an ‘M’, and that is when the subsequent logo came into existence in 1968 as a golden ‘M’. Throughout the 1970’s the golden arches modified into ‘M’ remained a prominent logo for Mc Donald’s; it underwent further modifications with a tinge of red into its background too. However, the foundational’ remained the same. In 2003, the official Mc Donald’s logo was designed by Heye & Partner GmbH which encompassed the slogan “I’m lovin’ it”. This campaign by Mc Donald’s in 2003 was the most successful and the logo has enhanced the identity of this franchise in unprecedented ways ever since then.

The Lego Group is a private company situated in Billund, Denmark. They started off by crafting wooden toys in 1932 and by 1950, they were rolling into the technique of creating interlocking brick toys which gained them the immense reputation that they possess today.

The first Lego logo was devised in 1934 which contained an image of a wooden box with “Lego” carved on it. However, in 1950, a circular logo was introduced. Towards the end of 1954, the word ‘Lego’ was structured into an oval shape with striking curves to the font. The Lego logo with two dots in a horizontal plane on both sides of the logo contained in the oval became popular and was standardised in 1955. After almost five years, a square-shaped logo appeared where the two dots were not to be seen anymore. This logo underwent further modifications. Finally, in 1973, the Lego Company approved a logo which was close to the current Lego emblem. In that logo, the word ‘Lego’ was highlighted in black with a bright yellow outline, embarked on a red background which was put together in an overall rectangular shape. However, the current logo is squared with wider pixels of ‘Lego’ on it. 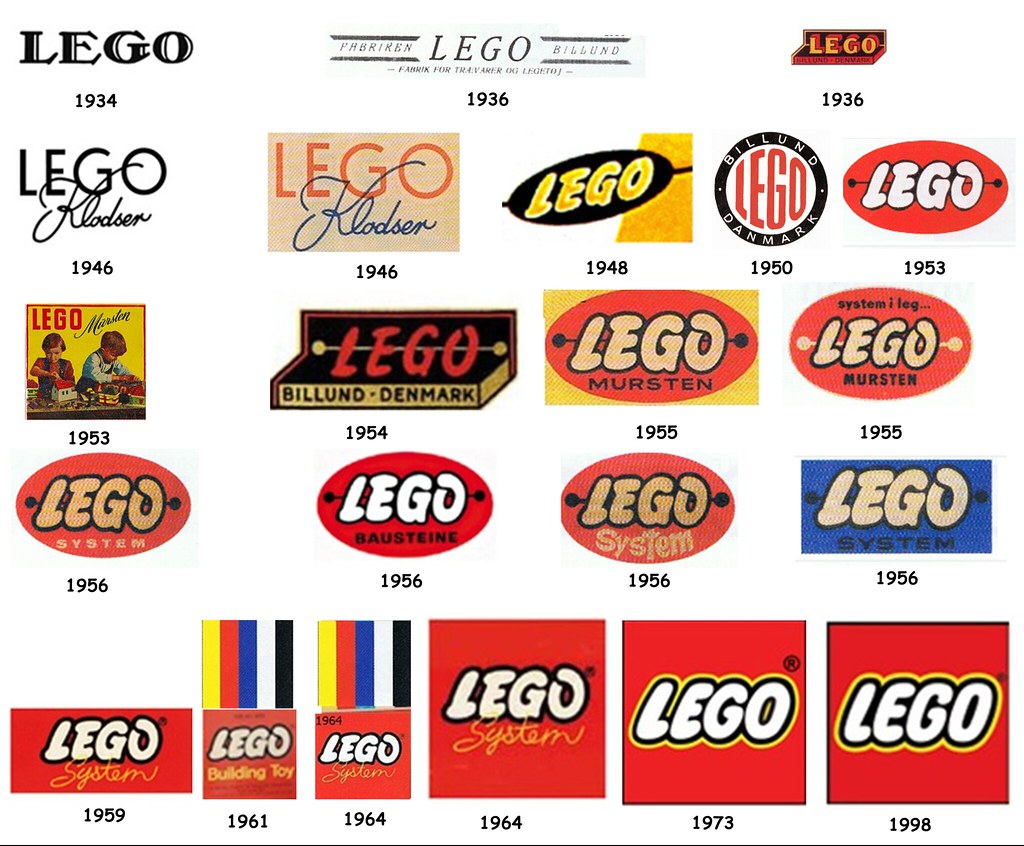 The Mercedes Benz logo is represented by a three-pointed star which indicated the prominence and authority of the brand over land, sea and air. The very first Mercedes logo was a simple logo that read out “Mercedes” in silver colour, while it had a black background to it. When the two companies merged in 1926 that is when the first official logo of Mercedes Benz came into existence which was based on two primary colours; silver and blue. The primary logo featured Mercedes at the centre of a double-rimmed circle, while the external rims contained the names Mercedes and Benz embedded within. Following the 1933 logo, the name of the brand vanished from the subsequent logo design and the Mercedes Benz logo then consisted of a simple back circle with the a three-pointed star in the centre. However, in 2009, the final logo on Mercedes Benz came into existence; a logo which has lasted to date in the automobiles industry. The black tri-pointed star was replaced with silver and was given a 3D touch. This logo has been the favourite among Mercedes aficionados.